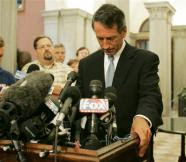 It was all a mystery at first: the case of the missing Governor. What happened to the possible-Presidential-nomination-seeking, stimulus-fund-refusing, moral-values-loving Republican from South Carolina? He vanished without a trace, leaving behind his cell phone; even his wife says she doesn't know where he is. His people had a story: he was hiking the Applachian Trail. Then someone reported seeing him in the airport a few days ago. Turns out he left the country - for Argentina. And what was Governor Mark Sanford doing in Argentina? Escaping from his wife and four sons to visit his mistress.

The Headlines were blaring: "THE ARGENTINE AFFAIR: TEARS, EMAILS, SECRETS. Sanford's South American sweetheart has been a friend for eight years, though apparently things only turned romantic in the past year. His arrogance and hubris were stunning: to visit his Argentinian lover, Sanford reportedly "slipped his security detail, lied to his staff about his whereabouts and neglected to transfer executive power to the lieutenant governor in case of a state emergency." Turns out he took three previous trips to Argentina with taxpayer money in the past. His wife, Jenny, discovered the affair five months ago. They took a trial separation, and Sanford did the only thing a sensible governor should do in such a situation - mysteriously disappear.

At least his unfortunate wife is maintaining her dignity. Not so much for Sanford. His love letters have already hit the net, and the entire media is in a spectacular uproar over the dramatic political hijinks.

In his press conference today admitting the affair, Sanford resigned from his position as chair of the Republican governor's association. This wannabe poster-child for the emergent post-Bush "return to true Conservatism" crowd has given us just another Republican sex scandal by a family-values-touting, Bible-bumping hypocrite. Amazingly (or perhaps not so surprisingly, given your politics), this entire affair comes off the heels of the revelation of another sordid affair: that of Nevada Senator John Ensign, who resigned from his Senate leadership position after admitting to having an affair with the wife of one of his longest-serving staff members and family friends.

Its hard to judge whose prominent national disgrace is more revolting. But it seems to be part of a long pattern of Republicans saying one thing about family values, and then doing things like sleeping with prostitutes, soliciting gay sex in airport bathrooms, and sexually harassing House interns (see Senator David Vitter (R-LA), Senator Larry Craig (R-ID), Congressman Mark Foley (R-FL)). These holier-than-thous shamefully underscore the serious crisis in leadership facing the Republican party, whose most prominent figures right now include an adulterer (Newt Gingrich), a thrice-married prescription drug addict (Rush Limbaugh). Its time for Conservatives to stop lecturing Americans about family values when they can't even keep themselves in line with what is right.
Posted by adamabaum at 10:00 PM