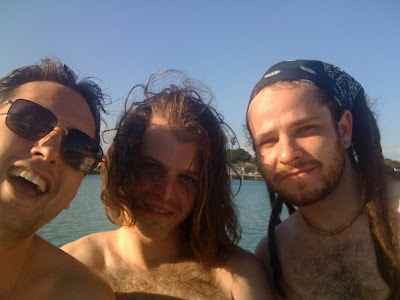 The world can be sad, lonely and cruel. Was that the lesson that Avi Greenberg tried to teach us when he took his life on Saturday morning, Thanksgiving Weekend? Avi was a troubled soul. He was kind, honest and intelligent, but so very sad. You could see it in his eyes. Maybe it had something to do with his childhood: the foster family, the estrangement from the Orthodox Jewish community in which he was raised. He never told me, and now we'll never know. Beyond the sense of pain and loss I feel, I am also left wondering why. Why would a person who was so clearly loved by so many people do such a horrible, hopeless act? Maybe, in that last, desperate moment, he was so fixated on his own sorrow that he could not sense the love of his friends. I don't know. I don't have any answers. All I have is memories, a few photographs, and the story I am about to share with you tonight.

Avi sent me this story, entitled the Ambassador's Gift, last September. I was surprised that he came to me. He sent me the file, a story he had been working on, in an email with this message: "tell me what you think and if theres anything i should change or elaberate on. this is the first draft so i know about all the grammatical errors" I was busy with my third year of law school, so I saved the file to my desktop, and proceeded to ignore it. When I finally opened it up, I only gave it a cursory glance. After finishing the first page, reading with my critical editor's eye, all I could see were the imperfections: passive constructions, misspellings, simplistic characters. I dismissed it as the work of an amateur. I never emailed Avi back to tell him what I thought. But I was so selfish. I didn't even give it a chance. I didn't even finish this three page story.

Over the past few days, as I reflected back on our relationship, I kept coming back to this story -- the fact that it was unfinished, both the story itself, and my reading of it. Tonight I finally opened it up, and realized what a clever little parable it is. It is not the most original piece of writing, but it has heart. It earnestly attempts to convey truth and meaning through irony. In some way, it feels like some sort of metaphor for Avi's life: imperfect, far too short, too-often neglected, but full of wisdom and promise. Though Avi is gone, his story lives on. I hope you will enjoy it.

The Ambassador's Gift
A short story by Avi Greenberg