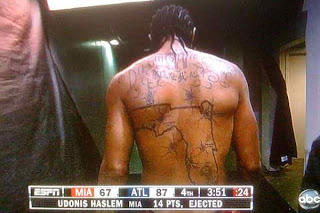 There was a moment near the end of the Heats White v. Red shirts scrimmage game on Thursday night when Udonis Haslem gave a stiff backarm to one of our eager new draft picks as he drove to the basket. The other guy fell to the wayside -- even now, I can't remember his name -- but the statement from Udonis was clear: this year I will make an impact. Maybe he was angry after seeing this article in the Herald entitled "No guarantee loyalty will be rewarded for Miami Heat’s Mike Miller, Udonis Haslem." I was certainly upset when I read it.


I never seriously thought Riley would dump Haslem, a guy for whom the Big Three all took a pay cut to keep in Miami last year. And poor Mike Miller has just gotten unlucky with injuries. Miller needs a second chance, and Haslem is the heart of our team -- he's a team captain with Wade. Instead, we had a great offseason.  The Heat kept both these assets and added Shane Battier, a defensive minded team player with talent, and Norris Cole, a young kid out of Cleveland State who probably got drafted too late and is already giving Mario Chalmers a run for his money. Big second year Dexter Pittman is getting some good looks, and Riley is taking the long view on veteran Eddy Curry. Our 33 point victory over the Magic (118-85) in our first preseason game tonight was our third highest best margin of victory ever for a first preseason game. The team kept the core of the team that came to Game Six of the NBA Finals last season, and wisely filled out its roster.


In his post-game interview after the game tonight, Lebron agreed that there are two open spots on the team right now. This breeds a healthy competition for a starting spot in the big leagues with The Big Three. It is an environment that could yield great dividends in young talent like Pittman and Cole, and help keep guys like Chalmers, Anthony and Jones  sharp.


The Heat work hard and feed off of each other, with Lebron and DWade setting the example, each vying for the distinction of best in the NBA. Yet as much as each can shine on his own, their greatest achievement will be winning an NBA title together. The bravado, the sense of history, the sheer audacity of it all -- it may infuriate the rest of the country, but for us down here in Miami, the real Heat fans, it is exhilarating. As a lifelong HEAT basketball fan, I am excited to see my team take on the entire league for the second time. Last year they fought hard, and Dirk finally had his day, but 2012? 2012 is our year!

1. Haslem is an obvious keep who is on a below market contract because of loyalty to Miami, even factoring his injury history.

2. Miller will likely get amnestied at some point into the season, but only after the Heat have reason to need cash. No reason not to play a waiting game here.

3. Eddy Curry is not a long view situation. He is there for 2 reasons. His agent is a certain someone that the Heat have reason to suck up to. There's a small chance he turns out to be a reasonable big on a team that sorely needs one.

3. You didn't mention perhaps the Heats 2nd biggest off-season move (after Battier of course), and that is signing Chalmers to a 3- year $12 million dollar deal. They kind of had to because they had no exceptions after Battier but this contract will definitely come back to bite later.

4. The Heat are easily the favorite and definitely going to improve a lot over last year- a year where they were already easily a level above the rest of the league.


I am actually delighted to read this webpage posts which carries plenty of useful facts, thanks for providing these information. msn hotmail sign in