The Controversy over Michael Oren's Commencement Speech at Brandeis University: the Value of Listening and Academic Freedom 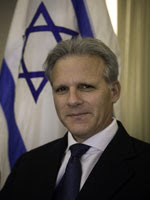 Once again, in what seems at this point to be an almost time-honored tradition, my alma mater, Brandeis University, has set off a wide controversy over its decision to give a prominent speaking engagement to a partisan in the Israeli-Palestinian Conflict. This time, the fight is over Michael Oren, an American academic turned Israeli Ambassador to the United States who will be giving the commencement address at this year’s graduation ceremony.

The disputants have fallen into their predictable camps. On one side is the liberal, anti-war, anti-colonialist crowd, who began a petition calling on the University to revoke Oren’s invitation to address the graduating class and replace him with a less “divisive” figure. Spearheaded by the influential Brandeis blog innermostparts.org, the petition proclaims, “[h]is far-right views are divisive and do not reflect the diversity of opinion on campus, and moreover politicize what should be an uncontroversial, inclusive role.” It further argues that, because Oren’s far-right views are antithetical to those of many Jewish students at Brandeis, his speech is “in conflict with one of our founding values: our integral relationship with the Jewish community.” It concludes by threatening that, if Oren is not removed, the signees will boycott commencement. It currently has 126 signees.

On the other side is the pro-Israel crowd, an assortment of individuals spanning a relatively broad political spectrum, from liberal sympathizers like myself, to right-wing conservatives I normally don’t have anything to do with. This camp has sprouted its own petition available at the facebook group, “A letter in support of President Reinharz and Michael Oren.” Its 247 members support the University’s decision to invite Oren to speak on the grounds that, while admittedly controversial, Oren is a high profile academic and political actor of international renown who “reflects Brandeis University’s historic ties to the American Jewish community and timeless dedication to academic excellence as well as Justice Louis Brandeis’ own commitment to Zionism and Social Justice, a legacy on which this university was founded.” It calls on Brandeis students to receive his remarks “critically and respectfully, demonstrating the intellectual maturity that makes Brandeis an institution characterized by academic rigor and reverence.”

Then there are what I will call the pragmatists – people who have assessed Oren’s invitation in the context of Brandeis’s long history of inviting controversial speakers to address our graduating classes, and concluded that its just not a big deal. Several people have pointed out that past Brandeis commencement speakers include the Prince of Jordan, Massachusetts Supreme Court Justice Margaret Marshall (who wrote the controversial Goodridge opinion legalizing same-sex marriage), liberal Israeli Supreme Court President Aharon Barak, neoconservative Paul Wolfowitz, Bill Schneider (a CNN political analyst), Cory Booker (mayor of Newark), and Tom Friedman – all political figures with distinct and sometimes controversial points of view on a wide range of topics that include the Israeli-Palestinian conflict. These people make a strong point; if Brandeis could tolerate these speakers, why can’t it accept Oren? What it is about the Israeli Ambassador that makes over 100 Brandeis students want to walk out on their own commencement?

The fact remains that the Israeli-Palestinian conflict is a particularly hot topic on the Brandeis campus. Because of the fact that Brandeis is historically associated with Zionism, students who oppose Zionist beliefs feel particularly adamant about distancing themselves from what they view as a kind of majoritarian (perhaps even anti-majoritarian) tyranny that reigns on the campus. On the other hand, students proud of this strand of Brandeis history feel all the more compelled to stand up and vigorously defend it. The result is two bitterly divided communities that are largely engaged in talking past each other, rather than entering into meaningful dialogue about the issue that tears them apart. In a way, it is a microcosm of the Israeli-Palestinian conflict itself, with two sides trading in absolutes and dealing in renunciations and commands.

For my part, I think this is very unfortunate. While I sympathize with close friends who are offended by the choice of Oren on the grounds that they do not want to be assaulted with divisive rhetoric at their graduation ceremony, I am highly skeptical that Oren would be short-sighted enough to wade into political waters at a commencement ceremony; it is simply inappropriate, given the occasion. While his point of view will almost certainly come across, it will likely be in reference to things like fighting for what you believe in and making a difference in the world – lessons that students on all sides of the Israeli-Palestinian conflict can appreciate even if they do not accord with the examples from Oren’s own life.

Moreover, Brandeis’s history of inviting controversial speakers to speak at commencement demonstrates that our student body is perfectly capable of sitting through the address of a person whose political views are likely highly offensive to at least some students in the crowd – Justice Marshall jumps to mind as a prime example – yet those speakers did not face the kind of vitriol and threats of boycott that face Oren. Conservative students did not petition and threaten boycotts of a liberal judge, a liberal Israel Supreme Court Justice, a liberal mayor, etc., yet supposedly “liberal” students are now threatening to skip their own commencement because of Oren’s address. This is the worst kind of intolerance, which individuals who cherish the freedom of speech and open intellectual inquiry should not support.

On a larger level, I think this controversy also speaks to the unfortunate extent to which individuals on both sides of the Israeli-Palestinian conflict refuse to acknowledge the legitimate claims of the other. On the one hand, it is undoubtedly true that many right wing Jews and conservatives do not pay enough attention to the suffering of the Palestinian people, and discredit their legitimate claims to disputed territories. They lump a small group of terrorists and petty dictators in with the majority of Palestinians, the majority of whom have been abused and manipulated by their own government, the Arab world, and at times, the Israeli government as well. They refuse to recognize that, for the average Palestinian, their animating desire isn’t the destruction of Israel or the murder of Jews, but rather to enjoy the simply necessities that all human beings want: a safe and healthy environment in which to raise their families in dignity and peace.

On the other hand, too often, the pro-Palestinian crowd rushes to vilify Israel supporters as genocidal fanatics, and Zionists as colonialists with no legitimate claim to a state of their own. These people ignore the historical reality that it was European anti-Semitism and the horrors of the Holocaust which forced Jews to migrate to their ancestral homeland in Israel, where there has been continual Jewish habitation for over 3000 years. They regard as insignificant the fact that the original 1947 partition created two states – one Jewish, one Palestinian – which was destroyed not because of Israeli expansionism, but rather because Israel’s five Arab neighbors immediately declared war on the fledgling state and set out to destroy it and all of its Jewish inhabitants. And they turn a blind eye, or even try to justify Palestinian terrorist attacks that deliberately target civilian population centers with suicide bombings and indiscriminate rocket fire.

The two historic narratives that inform the most extreme ends of this conflict seem irreconcilable, until one realizes that these groups are neighbors sharing the same land and limited resources, and that they must come together to achieve a just and permanent settlement. But that cannot happen if partisans on both sides of the conflict are unwilling to simply listen to one another in a spirit of mutual respect. The seeds of peace and conflict resolution begin where we put aside our heated rhetoric and actually hear each other’s stories, and then work together to find a solution. Is Michael Oren the least controversial figure to ever speak at a Brandeis commencement? Maybe. Maybe not. Is the fact that some students strongly disagree with some of his political views a reason to boycott graduation? Certainly not. I hope that cooler heads will prevail, and that my fellow Brandeisians will go to graduation in high spirits and with open minds. In this way, they will uphold the great Brandeis tradition of intellectual freedom and respect for difference, and set an example for partisans on both sides of the Israeli-Palestinian conflict here and abroad that could benefit a great deal from listening to each others voices.
Posted by adamabaum at 3:09 PM

Wolfowitz wasn't ever a commencement speaker at Brandeis. You're thinking of Wolfensohn, who spoke at the 2004 commencement.